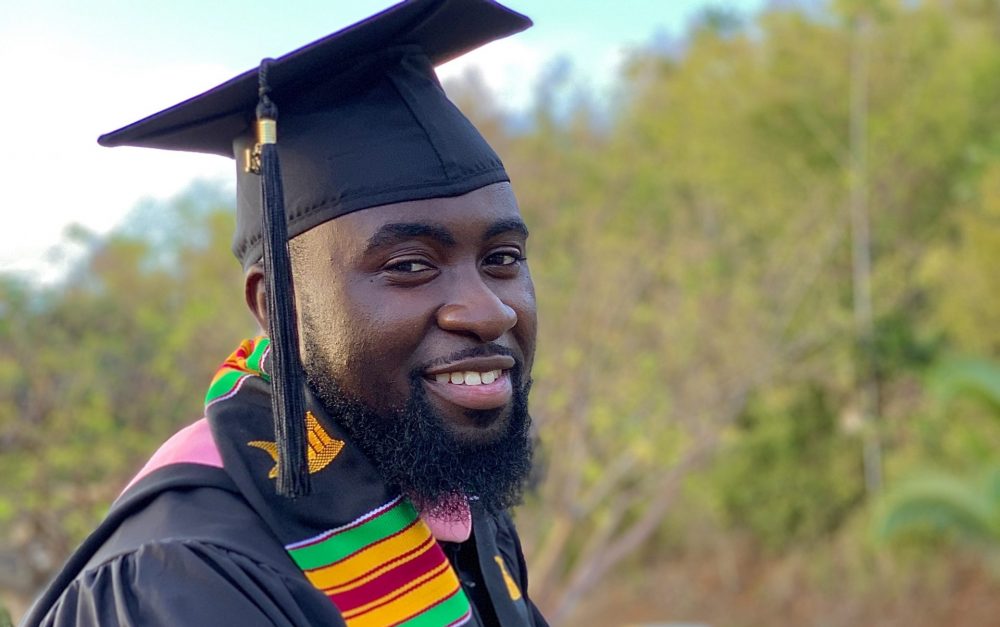 Sherwin Williams knew that he could earn his degree. His mother pursued her studies as a working mom. That was all the impetus he needed to attain his own degree in music.

“My mother completed a Bachelor of Arts in Education at the University of the Virgin Islands (UVI) and I am inspired by her for this because she attained this degree in her late 30’s while pregnant and raising a family of three,” Williams says. “I can only hope and pray to have inherited the same amount of drive, dedication, and heart.”

“I chose to attend this university because I would like the experience and credentials to one day be able to teach at the university level,” he says. “After high school, I felt like there was more to be learned, so this step to undergraduate was a natural one for me.”

“I chose to attend the UVI because it was affordable, offered many opportunities I didn’t initially know about, and I had an urge to defy the odds,” Williams says. “Being the recipient of the UVI Free Tuition Scholarship, honestly gave me the opportunity to study and not have to worry about debt. Moreover, not placing a financial burden on my parents was an answered prayer.”

“I chose this path because music is very fulfilling for me,” Williams says, “Being involved in the performance, production, and perpetuation of music gives me a good feeling. I do believe that it is God’s calling on my life and is the place where I can touch and reach people,” he said. “Besides personal fulfillment, I pursue music because it teaches many lessons that translate to life.”

Currently, he forms part of some of St. Thomas’ most popular bands, including the “VI Jazz Collective”, “Milo’s Kings,” and Dub Lab Band and has played with almost all the bands on island at one point in time.

The performances of Sherwin Williams take listeners on an intricate musical passage by way of his favorite instrument – the saxophone. “Music was the only thing that brought me true joy,” Williams says, speaking of finding his niche from the onset of his junior high years.

Williams notes that although he spent much of his time honing his art, his time at UVI was not confined to the Music Department. He was an active member of clubs such as the Resident Assistant Club and Musicians on the Rise. “Being a Resident Assistant for the Office of Student Housing was honestly a very rewarding experience,” Williams recalls. “Though there were challenging times such as Hurricane Dorian in 2019 and the pandemic in the Spring of 2020, I was still able to gain an enriching experience being a student and institution advocate simultaneously,” he says. “The same sense of responsibility to the resident students was easily translated over to my academic life as I often had to make sacrifices.”

Similarly, Williams says that “the Musicians on the Rise Club was instrumental in helping me personally be a part of the cultivation of students’ involvement in the music department.”

“Aside from clubs and organizations, I participated in numerous programs, ceremonies, and parties, whenever requested, which helped to keep my UVI pride and sense of unity in sync with my schoolmates, and colleagues,” he says recounting his campus experience. All of which Williams says forced him to be able to balance his love for music and his academics.

As Williams prepares for his future, he leaves UVI with several key lessons. “One lesson that I often reflect on is that your education, is what you make of it,” Williams says.

“Upon leaving high school, I had my reservations about attending UVI, as I had my sights on going away. There were lots of opposing comments and thoughts that came with the decision, both internally and externally,” he says. “However, as time went by and I began to tap into resources and began my personal development, I realized I can thrive anywhere that I am. I’m thankful to God for the many mentors, colleagues, and friends that I could lean on for support and counsel throughout the journey. Though circumstances at times presented challenges, the accomplishments that I am blessed to have achieved outweigh them all.”

“Another lesson I learned comes from one of my professors, Prof. Dion Parson of the Music Department: “Poor preparation promotes poor performance. Poor performance promotes (can bring you) pain and poverty.”