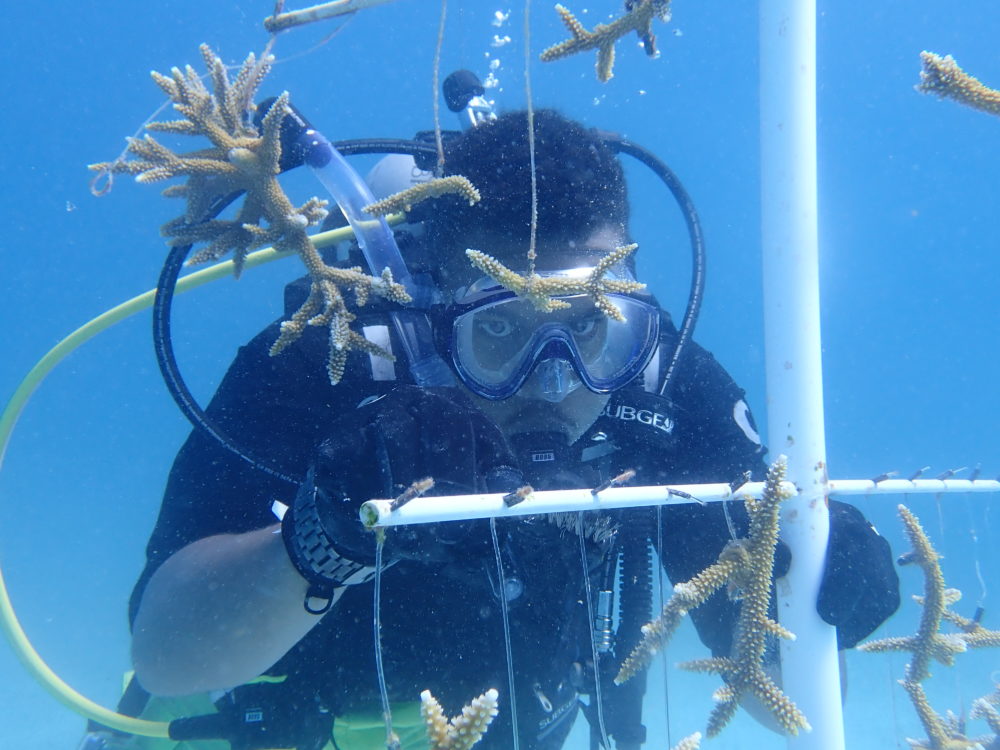 To say that Nicholas Durgadeen kept busy during his five years of study at the University of the Virgin Islands would be an understatement.

While completing the requirements to earn a Bachelor of Science Degree in Marine Biology, Durgadeen took advantage of the many co- and extra-curricular opportunities UVI had to offer, including research, internships and study abroad.

Hard work and sacrifice are familiar concepts for the St. Croix native, whose family was drawn to the lifestyle and values embodied in the U.S. Virgin Islands and moved to the Territory from the mainland United States when he was three years old.

“Coming from a single parent household, I saw and learned about hard work firsthand from my mother. Because of her, I put blood, sweat and tears into working and saving money so that I could help manage the expenses of my college education,” said Durgadeen, who started his UVI career at the Albert A. Sheen Campus on St. Croix before transferring to the Orville E. Kean Campus in St. Thomas to complete his studies.

As a student at Central High School on St. Croix, Durgadeen’s interest in marine sciences and conservation was sparked by his teacher Jesus Espinosa. While participating in a research program, he was introduced to Kemit-Amon Lewis and his work with the Nature Conservancy Program. This experience led to earning his first open-water diving license.

Durgadeen went to Florida International University as part of the National Student Exchange program, and also conducted research in French Polynesia as part of a project organized by UCLA. He believes that taking advantage of the opportunities afforded him at UVI helped to shape his view of his field of study and broadened his appreciation of the unique Virgin Islands community.

“Those experiences have influenced my growth and development as a scientist. I have a more nuanced understanding of the type of work I’d like to contribute to the world,” he said. “Living on a small island it’s easier to see the impact you’re having on your local community. It’s another thing to see people operating in different environments and learning how you can apply those lessons to your own community.”

Reflecting on the academic support he received at UVI, Durgadeen noted: “Dr. Theresa Turner [Professor of Marine Biology, Emerita] has been absolutely the best professor I could ask for. She would send us emails over breaks to encourage us to pursue opportunities. She would reassure me and give me the confidence to realize that I can actually make an impact and contribute even though I’m still a student, even though I’m still learning.”

While at UVI, Durgadeen was supported as a National Science Foundation SEAS Islands Alliance undergraduate student fellow for three summers. In 2018 he worked with the Department of Planning and Natural Resources (DPNR) and The Nature Conservancy on a water quality and coral health project. In 2019 he worked with DPNR East End Marine Park on conducting whelk surveys for improved management, and in 2020 he worked with The Nature Conservancy on a Sahara dust and coral project. He has volunteered to help with projects involving sea turtle tagging and coral disease monitoring.

During his senior year Durgadeen worked as an intern on a mangrove restoration project led by UVI’s Dr. Kristin Wilson-Grimes.

Durgadeen has been awarded a fellowship with the National Park Service on St. Croix, where he will work over the summer before beginning his new job as a Coral Restoration Technician at UVI’s Orville Kean Campus in August. This position is part of a coral restoration project led by Dr. Marilyn Brandt.

Looking back over the sacrifices he has made to achieve his goals, Durgadeen believes it was well worth it. “I feel proud that I can show my mom she did a good job of raising me. She can see that I can sustain myself while doing what I love and holding onto the values we share,” he stated.