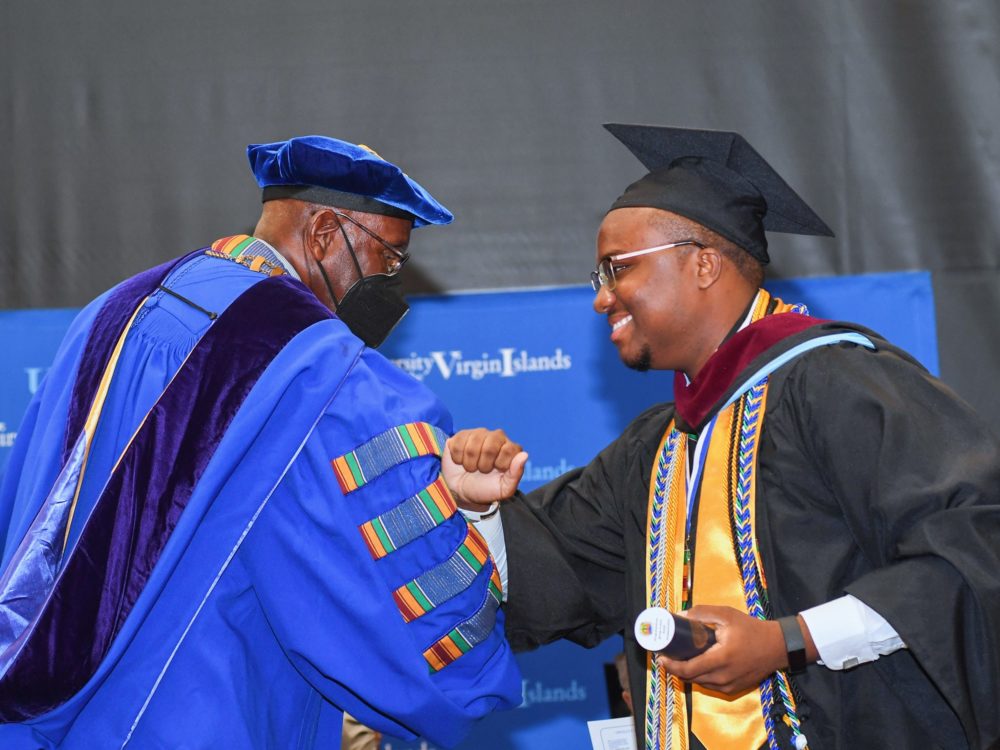 Although he had an early introduction to journalism and immediately recognized he had a passion for sharing stories and news, George Francis II admits that the road to earning a Bachelor of Arts Degree in Communication from the University of the Virgin Islands wasn’t always easy.

Coming to UVI with some real-life experience under his belt – having worked at the Virgin Islands Daily News as a high school student as well as having news team and broadcast responsibilities at his previous school in Atlanta, Georgia – Francis had his sights set on pursuing his passion for all things related to communications.

“Beginning with an opportunity in fifth grade to report about school activities in our little studio, I knew that I wanted to get into communications and become a news anchor. It’s all I talked about, all I looked into, and it’s all I wanted to do,” Francis recalled.

Throwing himself into his coursework and exploring every opportunity to learn more about different areas of communications, Francis continued to garner additional exposure through working at the VI Daily News, an internship with The Washington Center for Internships and Academic Seminars, as well as UVI’s Public Relations Office.

In 2021, Francis and several UVI Communication students competed at the 70th annual Southern Regional Press Institute (SRPI) virtual conference where they were awarded third place for ‘Best Public Service Announcement’ for their video presentation on the Jerusalema Dance Challenge. He also served as a student reporter at the Kennedy Center American College Theater Festival Region IV.

However, the highs and successes were counterpoised by criticism and discouragement along the way. “I was told that I didn’t have what it takes to be successful in communications or to work in the news industry. Some of those pronouncements introduced a sense of self-doubt in me, and at one point I felt that I should stop pursuing communications entirely,” he stated.

Francis is grateful for the timely and consistent support, mentorship and guidance he received from his UVI professor and advisor, Dr. Sharon Honore, who helped him to dispel those negative judgments and regain his self-confidence.

With renewed confidence and vision, Francis went on to achieve one of his major academic milestones: joining student journalists from 21 Historically Black Colleges and Universities (HBCU) in a virtual White House briefing with then-Deputy Principal Press Secretary Karine Jean-Pierre.

That memorable experience led to Francis’s being selected as one of eight finalists from among students at 30 schools to compete in the Black News Channel (BNC) Inaugural Journalism Project.

Francis can see now that his UVI career and experience have prepared him for any challenges he may face in the future.

“The personal attention I received and the strong relationships I was able to develop at UVI played a major role in allowing me to succeed at my goals. I will miss the sense of family and community connection most,” said the new graduate.

“I think I have a lot to contribute to my home, specifically in the areas of communications, journalism or public relations. Our student journalism chapter is really focused on promoting journalism in the Territory and providing opportunities for students who are interested in these fields to learn and grow,” he said.

Francis is the 2022 UVI Student Employee of the Year on the Orville E. Kean Campus on St. Thomas, and is the Secretary (and a founding member) of the University of the Virgin Islands Association of Black Journalists (UVIABJ) chapter.

In June, Francis will begin his career as Enrollment Communications Coordinator for the Office of Enrollment Management at UVI.